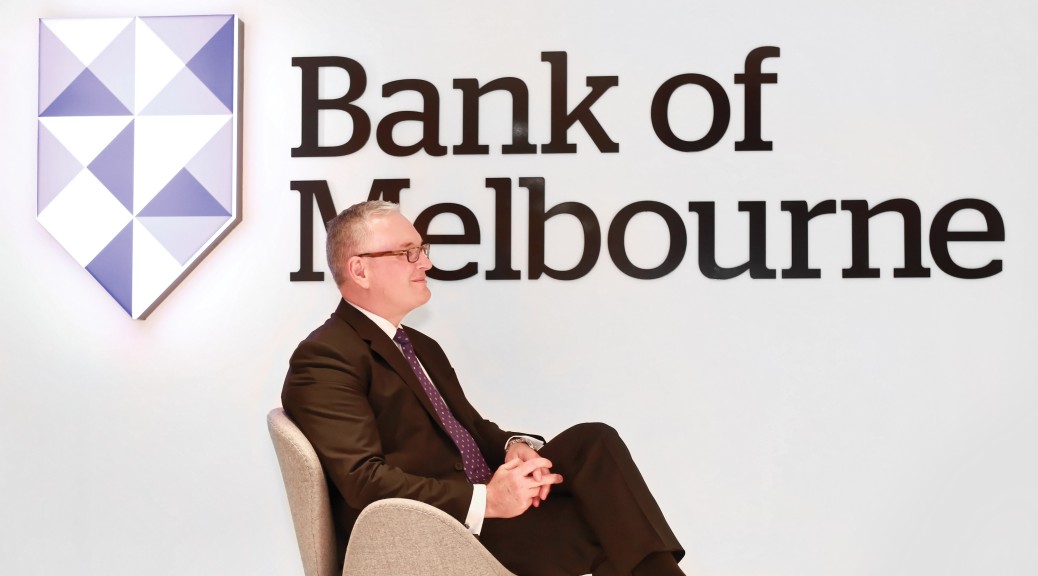 There’s only one thing Melbourne native Scott Tanner loves as much as his home city – his job. For a sit-down with the chief of Victoria’s local bank, Deborah Joy Peter takes a number and cashes in on the opportunity.

Bank of Melbourne chief executive, Scott Tanner, might have started out in the financial services sector around the mid-1980s as a computer engineer with a RMIT degree in applied science mathematics, but the long-time Executive MBA holder has gone on to become more than just a buttoned-down, business-as-usual banking specialist who crosses his Ts, dots his Is, crunches the numbers, and spits out forecasted figures.

Needless to say, three decades of having dabbled in the field coupled with a deep-seated fascination with finance has taught the Australian banker that the most treasured exchange in any transaction is the rolling up of one’s sleeves and getting involved. Such chutzpah is exactly the engine that powers the corporate juggernaut’s drive to lead the aforementioned people-centric brand as ‘the bank for Melbourne’.

Tanner’s illustrious career is testament of his commitment to his organisation, its people, and the community. It was experience, adopting a hands-on approach, and dedication towards a heartfelt vocation which transformed the great thinker into an exceptional doer. “I’ve always been interested in finance, in particular, the role that it plays in shaping the global economy and the impact the local financial services industry has on our lives,” he tells Essenze.

Since graduating from Melbourne Business School back in the day, he has helmed numerous business units and driven strategic analytic capability at a leading financial institute as well as tried his hand at management consulting as a partner at Bain & Company. His tenure at the global consultancy firm saw him set up the outfit’s local office and eventually spearhead the network’s financial services practice locally and across the Asia Pacific region.

According to the man himself, the most rewarding aspect of his commission has been spending time with customers and learning about their aspirations and motivations. “It might be their big idea for starting a small business, the overseas trip they’re planning to take when they retire comfortably or the state-of-the-art technical equipment that a commercial customer is planning to buy so they can grow.”

Having had to deal with arena-wide issues right from the get-go as well as clients from all walks of life within the region and the world over—including China, Brazil, South America, and South Africa—have but lent to his versatility as a captain of industry and further piqued his interest over the many challenges present on Australia’s financial horizon during this Asian Century.

In 2010, he joined the Westpac Group only to be appointed chief executive of the Bank of Melbourne upon the facility’s re-launch a year later. The highlight of his career, Tanner was part of the team assembled to design, develop, and plan the organisation-wide exercise. Prior to the makeover as a preparatory move, his contributions were focused on the bank’s revitalisation strategy and expanding the brand’s business footprint in Victoria.

“Launching a bank doesn’t happen every day. Indeed, it’s a rarity anywhere in the world since the global financial crisis. It was a bold move by any standard and it’s an extraordinary privilege to lead the bank at a time of rapid change in the industry and broader society.” Tanner has been making great strides playing his role, yet his work is far from finished, particularly in charting the country’s progress in relation to the Asian opportunity.

“Launching a bank doesn’t happen every day. Indeed, it’s a rarity anywhere in the world since the global financial crisis. It was a bold move by any standard and it’s an extraordinary privilege to lead the bank at a time of rapid change in the industry and broader society.”

Plenty still needs to be done to deepen the relationship with some of the brand’s largest trading partners to move it from a transaction-focused arrangement to a true partnership, he explains. “A recent survey found that less than 10 percent of Australian businesses are currently operating in Asia while only 12 have any experience with the market. This is an enormous opportunity for all of us, especially Australia’s two million small and medium enterprises.”